I was silenced at a the Llais Fanc when speaking up for Trans Rights.

I was silenced at a the Llais Fanc, a youth hustings event, when speaking up for Trans Rights.⌗

Some explainers on some words and the setting e.g (what is Llais Fanc?)⌗

The Llais Fanc is supposed to be a youth (16-25) hustings event in order to help inform young people make informed decisions for the upcoming Senedd (Welsh Assembly) Elections and get them enthusiastic about electoral politics. It is organised by Youth Cymru, a charity with the aim to “bring about positive change for young people in Wales” through their “grass roots values and strategic influence”.

Representatives from the Labour, Conservatives, Plaid Cymru, Lib Dems, and the Green party were present.

What happened before the event?⌗

I was fortunately alerted by a politician and ally who was invited to speak at the Llais Fanc held on the 25th Feb 2021, that the Plaid Cymru representative was Helen Mary Jones. For those, who don’t know, HMJ is well known Trans Exclusionary Radical Feminist. Here’s some proof. (TW: Rampant transphobia) They had emailed to the organisers their concerns, and essentially given a nothing burger response, when being asked about platforming a transphobe, one which, they had previously distanced themselves with publicly. When this was pointed out the webpage with the statement was removed. Lucky for us, it is archived here

I’m not going to go through the statement, but you may wish to, as it makes very clear that the reason for distancing from HMJ is her transphobia.

At this point, they messaged me asking for help, I was more than happy to oblige. Trans Aid Cymru has had members attend Youth Cymru projects before and I was a young person! So I tweeted, emailed. No response from Youth Cymru or LLais Fanc account or staff.

I finally called Emma Chivers, the chair of Youth Cymru as her number is available on the archived statement. She was very adamant about that I should trust the youth staff that organised this and she couldn’t step in as it would go against her principles of the organisation. I argued and explained that this is distressing. She was surprised to hear the statement was taken down. She continued to argue that she will be challenged and to trust the staff and safeguarding they set up. She refused to understand that they were normalisng a transphobe. It wasn’t until I made hypothetical on how if it was racism this wouldn’t be tolerated that she backed down. She said to email her some details and she would follow up before the event. As you can already tell, I received no response and nothing happened and HMJ was still at the event.

I turned up bit late to the event. The code of conduct was a strange one, that everyone signed (I did to) including the politicians. I was very careful not to breach it.

The zoom was set up that so you could not have any public discussion or ask questions directly to the politicians. You could not unmute yourself, you could only watch, no real direct way to engage. The question were preset, and any questions during the hustings had to be submitted to the Llais Fanc staff and approved. None of the questions on transphobia were asked. This includes questions submitted before and during the event. Furthermore there was no fact checking and the code conduct essentially prevented the politician actually attacking each others point and essentially allowed them to repeat propaganda and talking points uninterrupted.

So I decided to step it up. Many programs allow you to change your background of your webcam, including zoom. I used a NVIDIA Broadcast to do this as zoom sucks for people of colour. After awhile my video feed got disabled by the hosts. What was my background you ask? Surely it must have been inflammatory enough to disable my webcam feed! It was a picture of trans flag with the words “Trans Rights are Human Rights” emblazoned on it. Specifically this image: 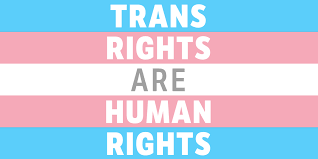 So I raised the issue with the hosts via the chat. No response from any of them. They also then disabled the chat for multiple people including me, so you couldn’t raise anything with the hosts. (I can’t confirm it was disabled for everyone.) So I changed my profile picture to the image like so:

Then I got kicked.

All while HMJ was still present and unchallenged on her history of transphobia.

In conclusion, Youth Cymru are more than happy to silence me, a young trans person of colour standing up for trans rights by displaying a flag, so they don’t have to question or challenge the transphobe they platformed. Youth Cymru is not safe for trans people.

The biggest surprise to me was how disengaged I felt at the end for electoral politics. I don’t know how they chose the questions, but there were no questions on COVID, minimum wage, the housing crisis (you the know the fact young people will be either stuck renting and living with their parents for longer.) The questions were bad and not really about young people specific needs and wants.

TL;DR: Youth Cymru sucks and is okay with transphobia now. HMJ is still a bigot and a transphobe. Most of our politicians are a joke who don’t care about young people